The most important messages are selected and put into this forum with special attention.
Post Reply
7 posts • Page 1 of 1

This is an answer I gave on the subject:

I don't know guys. There a whole lot of talk on antisemitism and the holocaust totally happening an a Jew totally been rescued from homicidal gas chambers. It was sickening to see that old Jew lie with a straight face. Holy fuck, these people are evil.

Other than that Trump says, apparently the CIA stooge named Guaido is the new ruler of Venezuela. Iran=Evil and Washington is preparing to hand over Afghanistan to Taliban terrorists who they helped created during Soviet occupation then tried hunting alqaeda after the 911 false flags which was to get Oil really. Now they're been pushed out of Afghanistan and the middle east and thus the new middle east is south america. China and russia are reportedly supporting Maduro. Trump supports Guaido. John Bolton wants maduro out,pro America Guaido and american oil companies in..

There was talk about building a border wall which the democrats aren't supporting because they're fucking stupid. Imagine leaving your whole southern border without protection so Mexican ms13 gang members can come in to rape your women and homicide your children and sell women into prostitution . I'm paraphrasing trumps words BTW.

And about other things that Trump has achieved which was awesome.
Though my only focus went towards the holocaust theme. Even Dwight Eisenhower never mentioned the holocaust in his sotu ,few years after the holocaust lie started spreading. Why would trump address this ?

America has a traditional policy of wanting control over the America's as the hemisphere of American power this was official policy forever and even caused war with European powers such as Spain. A lot of the establishment does not want a total puppet of China and Russia and Iran friend in their backyard. The amount of regime change and Imperialism America commit's in the America's hemisphere is extreme. Now that America is in a new cold war with Russia and China its getting real.


The reaction of Bernie and AOC to Trump's statements about Communism a lot of people have mentioned its got a lot of notice. Trump's father was in the JBS so natural he is totally anti-Communist and this might extend to his policies about Maturdo down there in Commie land.

AOC and Bernie are in the same tribe as Big Mouth of the House, Nancy Peepeeosi or whatever her yenta name is. So naturally they share a desire for the victory of their tribal religion. Big Mouth of the House, Nancy Peepooposi or whatever her yenta name is hides this better in public kind of, Marxism should just be called Judaism as Jews have stated, because that's all it is. Judaism is a political movement for world control. Bernie is the representative of the impoverished working American classes in his million dollar mansion and sports car. AOC is just not presentable thankfully. She looks like a psycho hose beast any day of the week. She probably gives children nightmares. Who let her out of the basement.


Bernie if he had of ran would have gotten a lot of votes especially in the rust belt regions which are Democratic area's this was revealed by an author and journalist who wrote a book on his two year tour of the "sacrifice zones" in America where its third world poverty now this is also where the opium plague thanks to the Jewish Sackler dynasty is the strongest, 400 hundred thousand American's have died from this Jewish run opium plague just like the Sassoon family who the Sackler's are related to, did the same to China. With the help of their fellow Jews the Rothschild's and Solomon brothers . Bernie would have moved the debate into total Marxism without calling it that and created a new narrative he might have made it more popular due to his overall platform. Bernie would have been a popular candidate because his platform is what people already wanted in many cases. Taking the banks to the woodshed, breaking up corporate monopoly, ending American involvement in foreign wars, debt forgiveness and such. Who's platform does that sound like as well.... The current President. Its not about ideology to the masses its about the platform. The ideology is what you do when you have the power after.


However Bernie being a Jew couldn't help himself when the other Jew, Yenta Clinton gave him shekels which from reports he bought a new mansion with. So he took a paid dive. I guess its ironic that Communist Bernie proved his Tribal mentor Karl right when Marx stated that money is the real god of the Jews. Bernie lived a lot like Karl on other peoples dime. Marx was a wealthily to due grabbler himself just like Bernie they had the same hustle pretend to care about normal working people and then use this to enrich yourself. Money was Rabbi Marx's god. Funny he changed his name from Mordechai to Marx.... Guess that would have way too much obvious.

The Democrat's are not stupid the Party is run by Jews and they want those open borders it was the Jews, Javis and Seller that got the 1965 open borders act passed thought and they did this as front Jews for a wave of Jewish lobbies and Jewish banking elites that pushed for this together, not for Israel though. This is to end America its the Kalergi plan for America. The original Immigration act for America such the Naturalization Act created by the Founding Fathers stated one has to be of White Europe race and good moral character to become a citizen of America. Race was the basis for citizenship in America from the start. The Naturalization Act was upheld for centuries and there was a long running battle between only organized Jewry and the Nativist European American elites over this. Till finally in 1965 the Jews won.

If Bernie had of ran against a Muppet like Teddy boi who goes on stage with fooking snot all over his face, he would have won. No different then how everyone thought Trump was a joke candidate but he had a good platform and a weak opponent who ran a bad campaign.


However the AOC types are now pushing the Democratic Party into a battle within for control that might cause it to fall apart. So that is good however the other option is the Neo Cohen's on the right......Trump is not going to be President forever when he leaves office some system stooge will take his place.

However Trump has done more to show everyone Jews run America then any other President. By praising them the overtop way he does its become a comedy show all he needs to do is walk out on the stage with a Menorah in hand and a yarmulke on for extra effect to Jewish Seder music and having Kushner around and such he is exposing them to the world. The Jews are in a catch 22 situation now. What's a Jew to do....Charge Usury ,call everyone anti-Semitic and racist and try and shut it down cause the Goyim know now. The Jews are pushing on Trump all the time and attacking him constantly no matter what he does for them and he might just get fed up with them enough. Trump has helped to destroy the mainstream media spell remember that.
Top


Hanukkah celebrates the miracle that oil thought to be enough for only one day burned instead for eight. So the Jewish festival of lights is also, in a way, a celebration of surprise.

A temple in Queens got a small dose of surprise on Sunday — the final night of Hanukkah — when Rep.-elect Alexandria Ocasio-Cortez, a New York Democrat with a knack for dramatic flourish, told those gathered to light the menorah that her ancestors were Jewish.

“One of the things that we discovered about ourselves is that a very, very long time ago, generations and generations ago, my family consisted of Sephardic Jews,” Ocasio-Cortez said. These are Jews who settled in the Middle East, North Africa and southern Europe after the Jewish diaspora. They were expelled from Spain in 1492.

The announcement drew delight at the Jackson Heights Jewish Center. Someone in the audience at the event, organized by Jews for Racial and Economic Justice, made a remark, which can’t be heard in a video of the congresswoman-elect’s brief speech, but which seemed to embrace her as a fellow Jew. She replied, “He’s like, ‘I told you! I knew it! I sensed it!’”
https://www.washingtonpost.com/nation/2 ... bc73043ae7

Transiting Neptune which dissolves, erodes, and undermines; the planet of drugs and insanity, is beginning to conjunct Nancy Peepooplosi's Mercury, which rules the mind. Neptune moves slowly. This will be interesting.
Top

High Priestess Maxine Dietrich wrote:Transiting Neptune which dissolves, erodes, and undermines; the planet of drugs and insanity, is beginning to conjunct Nancy Peepooplosi's Mercury, which rules the mind. Neptune moves slowly. This will be interesting.

Nancy Pee-Poop-Losey also already is mentally ill from some information on the subject.
| Joy Of Satan Websites Uptime Monitor https://uptime.theyknow.in/uptime.html 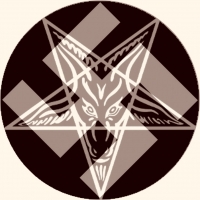 High Priestess Maxine Dietrich wrote:Transiting Neptune which dissolves, erodes, and undermines; the planet of drugs and insanity, is beginning to conjunct Nancy Peepooplosi's Mercury, which rules the mind. Neptune moves slowly. This will be interesting.

Nancy Pee-Poop-Losey also already is mentally ill from some information on the subject.

She is definitely becoming senile

HP Mageson666 wrote:Taking the banks to the woodshed

Gotta love taking the banks to the woodshed...
https://www.youtube.com/watch?v=jQA-0rstjnk
"When you sacrifice for your community, then you can walk with your head held up high." - Adolf Hitler
Top

I have heard Nancy Pelosi is ill from something.
She also says we do not need a wall. ( Her house has a big wall all around ).
Pope says America does not need a wall. ( Big wall around the Vatican ).
Can we use this planetary transit to do something with Pelosi?
Just,,, a thought
Top
Post Reply
7 posts • Page 1 of 1