The most important messages are selected and put into this forum with special attention.
Post Reply
5 posts • Page 1 of 1

My latest post here titled, Science and Truths: Egregor, has revealed a lot regarding truths about our Gods.

They are here to help humanity. Most of this help comes from giving knowledge.

The enemy has indoctrinated humanity with endless lies about Satan and our Gods, of whom they've made into hideous monsters in attempts to terrorize everyone into avoiding them at all costs.

A major lie is that Satan is supposed to be some slot machine jackpot.
The enemy promotes these lies in an attempt to destroy Satan's credibility.

The Christian Churches have indoctrinated the populace with lies regarding the power of the enemy they call God, that they slavishly worship.

They believe the Jewish claims that their so-called God is the most supreme and powerful being in the entire universe and other related crap. Omnipresent, all knowing, etc.
All of these beliefs are nothing but bunk promoted by the Jews.

Then, there are plenty of people who apply Christian teachings to Satan. There is no "all powerful" being. There is a microcosm and a macrocosm... Infinity.

The Jews control all the money, with a direct line to the enemy out there. Many people are financially desperate, and have been brutally fleeced.
Many people make a commitment to Satan, believing they will automatically score huge amounts of money and fame.

Our Gods come here to help us help ourselves, giving us knowledge. Unfortunately, because of the enemy (and everything smacks of issues like this in multiple worlds; a modus operandi, history of the same), has populations of worlds under their attack in most dire and desperate circumstances, our Gods are like a lifeboat in the middle of an ocean and become literally swamped and inundated with pleas for help as soon as they are manifest.

Satan helps a lot of us in desperate situations, especially if one is unable to help one's self. The enemy knows how miserable the worlds they infest become, being cut off from spiritual knowledge and power.

They try to set Satan and our Gods up to be expected to fulfill every whim.

The goal is for each of us to work on and develop ourselves spiritually, applying the knowledge they give us.

For those who are dedicated and have real serious issues, Satan and our Gods have helped and continue to help many.

In the Christian Bible, the Jesus character is the one that makes the false promise of it will give a person whatever they want in its name, if they bow down and give Jesus their soul. Yahweh also makes the promise to the Jews in the Torah, if they rape, enslave and conquer the world for Yahweh, that they will get global wealth and power.
Top 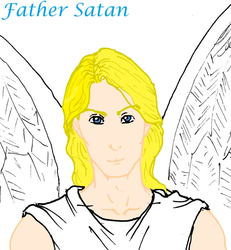 JOS has been around for a long time now. We are not a fad. We are real, not going anywhere and it's all about alignment.

There is a very real war going on. And we must prioritise according to getting the necessary spiritual warfare done. The Final RTR.

After all is said and done. It's becoming the type of person that's a winner.

We personally advance in meditation and spiritual power.

We use our own power and energy for our personal goals.

Without this knowledge that's been stolen and kept hidden away from society. How could a person dream of truly manifesting what they want and need in their lives.
What is the meaning of life? To meditate daily, empower and advance the soul because the soul is immortal. And to do the Final RTR daily. In the end all we really have is our soul. Spiritual Satanism is the best investment a person can make.
Top

The Jews curse us away from fame and wealth and the like. Whenever someone says something like this somewhere I like to say something like this. You can have as much wealth and fame as you want when you gain power through meditation and use that power to manifest it if thats still what you want when you reach a higher level of spiritual consciousness the Gods wont and should not be expected to do it for you. When most those types realize this if they ever do as this takes so much power and practice I would assume in todays Jew cursed world (nothing is impossible though) they will probably go back to church or give up cause they are lazy and just want someone to do things for them.

Me personally I want and dream of wealth often. Maybe everyone with Neptune in Capricorn does but I am doing a lot of money workings and have in the past. This will manifest eventually when I get more power into something BUT I will feel a sense of pride when it does and say hey I did this. I never once asked the Gods for this and I wont it would not even be right. Although someone suggested on one of my questions I ask them for guidance on where to go to meet the right people and what are the best money making ideas. I might do that.

These two goals are good though. Think of how great it would be to have many of us in influential positions in society and having a lot of money. I liked Cobras sermon on this. I am going to go for it somehow some way but I respect the demons and I love helping people. I wont use it for bad like those kikes. That is my other dream I dream of a world that is better and more free and where people actually care about and can trust eachother. I dream of a world without kikes.

If I do this its my own doing though that is what I am saying. Our gods help us a lot I want to help them back in fact I rarely if ever ask them for anything. I am an Aquarian type person anyways (strong Uranus and Saturn as they are my chart ruler and co ruler as I have Aqua rising) I always like to do my own thing.
Top
Post Reply
5 posts • Page 1 of 1