This group is for White Satanists.

It is Satan's intention that the races separate and evolve on their own. The purpose of this group is to educate, and enlighten our Aryan People who are direct descendants of the Nordic Gods. The Jewish communist world order, like their bible and nazarene, work to enforce race-mixing to destroy all racial and cultural identity, history and individuality so the Jews can take over the world with the goal of making slaves of all Gentiles.

"We will have to deal with Christianity in a tougher way than hitherto. We must settle accounts with this Christianity, this greatest of plagues that could have happened to us in our history, which has weakened us in every conflict. If our generation does not do it, then I believe it would drag on for a long time. We must overcome it within ourselves."
-- Reichsführer Heinrich Himmler; Speech to top leaders of the SS, June 9, 1942 Berlin 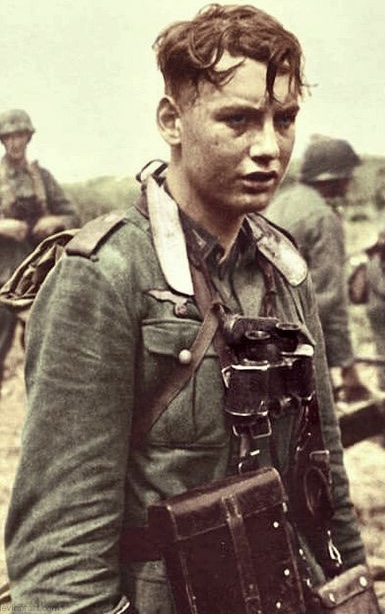 After a long, vast and rigorous track record of dedication and service to National Socialism and the cause of bringing down Christianity and International Jewry and promoting Satanism at the Wewelsburg Castle via meditations witnessed by Walter Schellenberg (head of the SD a German spy network and intelligence chief). By 1945, however, the situation had long been coming of the eventual defeat of Nazi Germany, Himmler had seen this since the fall of Stalingrad in February 1943. By now, Himmler felt that diplomacy might be the best way to save Germany from total annihilation and wanted to eventually be in power after the war but that would be a tricky place to start from considering how the Allies felt of him.

Himmler made mistakes and had misjudged the UK and US intelligence networks as they, were not what they were in the 30's, actively attempted to infiltrate groups (Kreisau group) to overthrow Hitler (UK was a bigger player/SIS/SOS/PWE) or at least assassinate him (Hitler), under pressure, Himmler considered wanting to end the war and push for peace with the West and still fight the Soviets. He had foreseen the coming Cold War and knew that the West would eventually need help in fighting the Soviets as he had admitted this to the British while in custody sometime later. Naturally the trio of Allies (UK,US,USSR) would reject most attempts at peace (as they did with Hitler), with the wish to annihilate Nazi Germany and denazify the country and break it up. For the Soviets, revenge was best served dead and cold, as most of the county would be destroyed by April 45' and the raping of German women and the killing of Hitler Youths would take place regardless of surrender or not... for them it was pure anger and hate for the side that had invaded the USSR and their homeland. Meaning no peace or ceasefire until the complete downfall of the Nazi Germany was complete and resistance was destroyed. UK was second in its hate of Nazi Germany, a country that was costing the British its Empire and the cost to run it, as after the war, the Empire would eventually break up as countries would be free of British domination and influence.
No peace would come in time to stop the blood from running across Europe, as most of the casualties take place in the last two years of the war.

After Berlin fell and the gap between the US/UK and USSR fell, Himmler went North and would eventually head south and try to hide from the British.
In the end Himmler would eventually give himself up to the British and would eventually be handed over to Captain Wells at the HQ of the British 2nd Army in Lüneburg, Wells noticed something in Himmlers mouth as he would bite down on the phial of poison and die in less than a few minutes preventing any interrogation by the UK or any international tribunal that would be held for other top leader of the Reich.

Link below for viewing purposes with added context
https://rarehistoricalphotos.com/heinri ... cide-1945/
[email protected]
Silence is of great profit.
An abundance of speech
profiteth nothing.
Top

Heil Himmler! I'm ever so grateful for the knowledge he passed on and the dedication he has for Satan! His dedication to protecting our beloved Satanic knowledge was illustrated by his sacrifice in the end!
Thanks for posting and much respect to the reichsfuhrer for all he has done!
Hail Satan Eternal!
Hail Andrasta!
Hail Buer!
Glory and Immortality to SS Children of Satan!
RTRs make your day more beautiful! https://satanslibrary.org/tspaintableb.html
"We will continue our struggle, fanatically and without pity until death!" - The Führer
https://web.archive.org/web/20160121220 ... lfire.com/
Top

The truth is that they beat him to death, he didn't commit suicide.
Top

It is possible, some accounts don’t add up, and the UK will not release some of those documents till 2045 so it will be some time before we can fully uncover what happened on the day of his death.
[email protected]
Silence is of great profit.
An abundance of speech
profiteth nothing.
Top

I never knew, but it seems like what a jew shill would do to an SS who won't give up intel. Himmler didn't give them any Satanic knowledge.
Grateful for the Satanic knowledge Himmler preserved and passed on.
Hail Satan Eternal!
Hail Andrasta!
Hail Buer!
Glory and Immortality to SS Children of Satan!
RTRs make your day more beautiful! https://satanslibrary.org/tspaintableb.html
"We will continue our struggle, fanatically and without pity until death!" - The Führer
https://web.archive.org/web/20160121220 ... lfire.com/
Top
Post Reply
5 posts • Page 1 of 1